BRECKLAND BIRDS: THE WOODLARK AND THE GOSHAWK

Although clearly very different, these two birds have something in common: Thetford Forest is one of their British headquarters, and among the best places to observe them.

There, however, the similarity ends. The goshawk remains a tricky bird to track down, despite its size (which can be close to that of a buzzard), whereas the woodlark has become a regular sight and sound on areas of clear-fell in the Brecks. In good conditions in spring – a still and mild day is most suitable – the air can seem full of the woodlark’s fluty song. Such days also offer the most likely chance to see goshawks soaring and, with luck, displaying over the forest.

Both species have a chequered history in this country. Never numerous, the goshawk was probably exterminated as a native breeding species during the 19th century, the victim of gamekeepers and egg collectors, but since the 1960s it has recolonised Britain through a combination of vagrants from Scandinavia (where it remains common) and released/escaped captive birds. The British population remains quite small – probably no more than 400 pairs in any one year, and widely scattered – but goshawks are back, and doing well. They are secretive birds, and surprisingly unobtrusive. This makes it difficult to be certain how many pairs are resident in the Brecks, but it is probably in the region of 20. They require large areas of undisturbed forest and hunt like over-sized sparrowhawks, flying low and fast through the trees and relying on surprise tactics to down wood pigeons, pheasant and similar-sized prey. 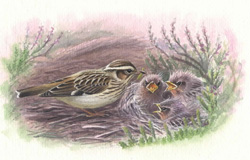 The history of the woodlark in Britain is rather more complex than that of the goshawk. Woodlarks require open areas of lightly-wooded country – heathland is especially favoured – in which to prosper, and so their numbers and distribution have always reflected the availability of this habitat. Common in the first half of the 19th century, they declined as heathland was enclosed and ploughed up, then expanded again during periods of agricultural depression (when land came out of production and heathland reasserted itself), only to be hit hard during the post-Second World War period, when the intensification of agriculture reduced their habitat again.

Since the 1960s, however, numbers have spiralled as woodlarks have taken advantage of newly planted forestry and, more recently, areas of restored heathland. The British population now stands at 2,000 pairs or so, of which over 400 are in the Brecks.

There are no events currently scheduled