This page is still under construction. More material will be added over the coming months. 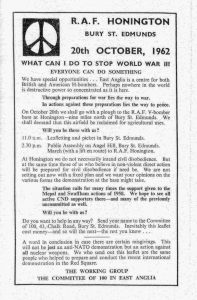 On 20th October 1962, CND protesters assembled in Bury St. Edmunds, and marched to RAF Honington. ou can see an old newsreel report of the march here.

One of the project’s more notable finds was an old photo album purchased from eBay by Chris Cock. We don’t know who originally compiled it or took the photos, but he was a member of the RAF police, and it recorded his postings around the world. At some stage in the late 1950s or early 1960s he was posted to RAF Feltwell, where one of his main duties appears to have been accompanying and guarding Thor missiles as they were transported from base to base. However, he was also on duty to guard various Brecks bases when necessary, such as in these pictures of the Honington CND protest. Note how unsubstantial the boundary fence is! 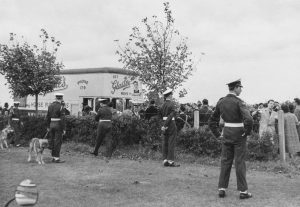 RAF Police secured the area inside the boundary fence and civilian police dealt wth the protesters outside the fence. 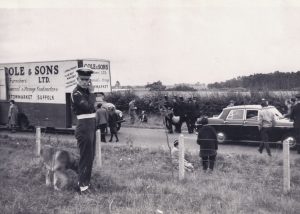 Furniture removal vans were hired from Glasswells of Haverhill and Coles of Stowmarket, and used to take those arrested ‘in bulk’ to a specially convened magistrates court. We contacted Glasswells but none of the Glasswell family have any recollection or record of this rather unconventional booking from almost 60 years ago! 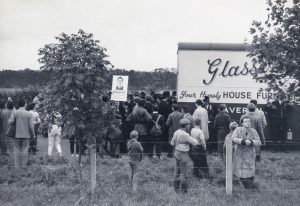 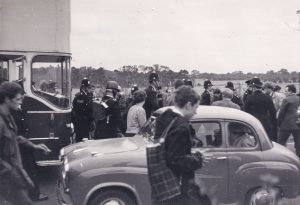 The face on the placard is that of Brian McGee, a serviceman who went to prison for disobeying an order. See http://sro.sussex.ac.uk/id/eprint/6910/1/Carroll,_Samantha_Jane.pdf)
“On a few rare occasions servicemen were convinced to join C100, and faced Court Martial. One airman named Brian McGee, who was stationed at RAF Henlow faced two years for refusing to obey an order. He eventually became very active in C100 and married a fellow campaigner.” 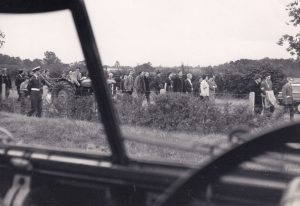 The final picture (above), taken from behind the driving wheel of an RAF Police Land Rover, is perhaps the most interesting. If you view the newsreel report, and pause it at exactly 50 seconds from the start, you will see this very Land Rover in the top right of the frame! You can see it again at 1:05 when it moves forward. It is remarkable that our volunteers unearthed two separate views of the exact same moment in time, one from inside the base and once from the outside! At 1:20 you can see one of the Glasswells removal lorries moving forward.