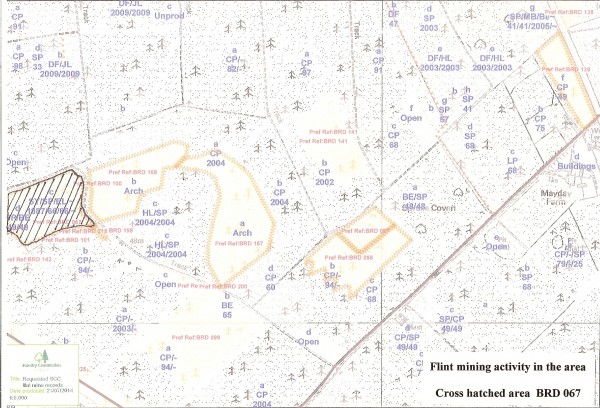 The site is set in broad leaf woodland of about 7.9 acres in an area known as The Elms approximately two miles south of Brandon near Mayday.

Under the canopy there is no undergrowth making the area which is covered with well deﬁned pits and gulleys (at least 147) easier to survey.

In 1879 Skertchly the historian who stayed in Brandon and visited the surrounding area writes that the “old pits in and around Elms Plantation were worked out before Lingheath Pits were started and perhaps may have been dug before the gun—ﬂint trade arose“.

However whilst carrying out our survey gun ﬂint waste was found at the eastern end of the site between pit no 145 and pit no 147.

The site is strewn with quartered ﬂint fragments and chalk waste.

The majority of the pits measured at 7 metres diameter from the centre of one spoil heap to the centre of the Opposite spoil heap. Most of the spoil heaps were about 3 metres wide so this would make the pit diameters 4 metres at the original ground level.

This ties in with a description of digging a mine given by Herbert Edwards (a ﬂint master) to A.J.Forrest in his book Masters Of Flint.

The miner then burrows horizontally under the ﬂoor stone as near as he can to the four points of the compass for about ten to twelve yards undermining the ﬂint as he goes. The burrows are about three to four feet wide at the base, which is kept ﬂat, and about two foot six inches to three feet in height which is rounded. Apses were cut at intervals along the burrow to extract more ﬂint.

We have calculated that to dig a mine to these measurements down to ﬁfty feet and including the burrows would require the removal of about seventy five cubic metres of chalk and ﬂint.

The site may have continued to the west for some distance as shown on the 1945 aerial photograph. Also about one hundred metres to the west is a long spoil bank created by the Forestry Commission levelling the site to plant pine trees. This Spoil bank contains large pieces of ﬂint and chalk waste. In this bank a small piece of burnt ﬂint ( possible pot boiler) was found. Also at the west end of the surveyed area another piece of burnt ﬂint was found.

There are several pits which are larger nine, ten, eleven and even twelve metres diameter. These pits may have been much older and were perhaps dug out using a different mining technique.

Because of the way in which the site was measured, ie. using a compass, grid lines and pacing the co ordinates of the pits, the plan can in no way be considered as accurate as it was difﬁcult to pace out exact distances because of the undulating ground level and avoiding trees etc. but it does Show the amount of mining activity at this site.

This whole area would beneﬁt from a more detailed archaeological study.

A GPS was used to locate the site and to calculate the area and elevation.

Due to the size and complexity of the site it was decided to section the area into smaller compartments by using lines placed across the site at right angles using a compass to align them NS and EW.

Rods were placed in the centre of the pits and the coordinates were taken by pacing out the distance from each line one pace = one metre. This located the position of the pits for the plan.

Having read in A J Forrests book Masters of Flint that in 1963 he invited Mr William Youngs a dowser to visit Grimes Graves to survey part of the site and he found indications of several more tunnels and chambers it was decided more for interest than for any scientiﬁc reason to use divining rods to survey our Site.

Most of the spoil heaps were not. uniform in height all the way round the pit ranging from a measurable height on one side to nothing noticeable on the other.

Very few of the spoil heaps had a gap and of those that did have, it was hardly noticeable. 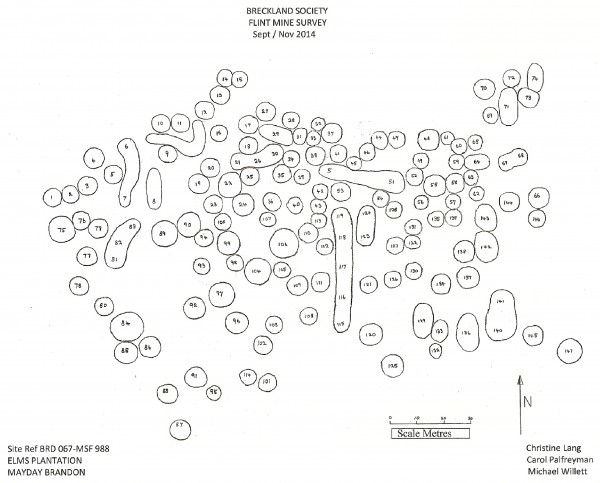 Our detailed survey results may be found in this spreadsheet: