Beachamwell is one of the most important warrens in Breckland… 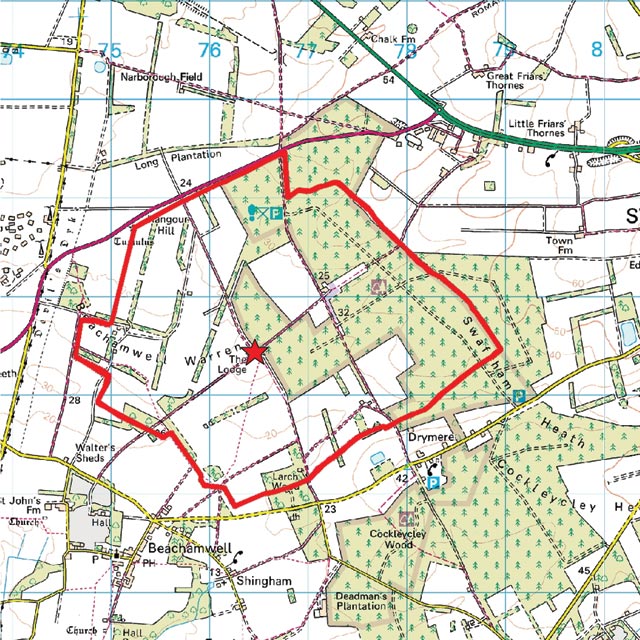 Documentary evidence for crop-growing to feed the rabbits, such as rectangular enclosures 1785 Sergeant Le Blanc’s opinion concerning modus …but if certain parts thereof were to be plowed and sown with corn for two or three years and then with grass seeds more feed would be produced for the conies ad greatly improve for the warren by keeping the greater number of conies thereon…the warren has immemorially been plowed and produced corn…1842 estate map shows ‘sweepages’ and ‘burrowings’ [NROCAT: MC 1784/2 828X9, NROCAT MC 2506/2]

Grid ref. TF765075, area 20 on map. the lodge was converted to early brick-built Victorian farm buildings for stabling horses, in use to mid-20th century – the site is now derelict. A pair of semi-detached Victorian cottages is nearby (now a holiday home, and previous one of two pairs of cottages). The name ‘Lodge’ seems to alternate with ‘Warren House’ on various maps. NB. Lodge Farm (Grid TF772082) and Warren Farm, (Grid TF777069) are Victorian buildings situated on Beachamwell Warren – we understand there were several more cottages built on the warren during second half of nineteenth century as the warren was taken into agricultural production but are no longer visible.

1780 lease for Warren Farm: ‘And will deliver every year forty-five couple of rabbits free from expense to the landlords at Beachamwell and Narborough (fresh killed in their skins. ) ‘And will on the 5th Day of the last year deliver up 2500 Rabbits upon the Warren as Stock for the benefit of the Landlords without payment and if more to be paid on the 26th December following for half at the former slaughter price, half at the market price of the winter slaughter, the common expenses of killing, taking and carrying such Rabbits (overplus) to Brandon to be deducted therefrom.’ ‘….rabbits to Brandon are to be calculated and ascertained by the four persons so to be chose as aforesaid which expenses are to be deducted out of the money to be paid for the overplus rabbits on the day before appointed and if such four persons should not agree as to the number of overplus rabbits to be paid for as aforesaid or at the expenses before mentioned they shall chuse a fifth person as umpire to determine and value the matters and things referred to him and his valuation thereof shall be made on or before….. ‘… the last year’s rent not to be paid until the value of the overplus rabbits be paid to the tenants.’ NB: these extracts are of marginal notes in the lease book – fuller details in main body of the lease [NROCAT MC 1784/2, 828X9]

1816 Letter from Motteux to Isaac Williams, gamekeeper, to get advice on dealing with poacher [NROCAT HMN 4/328 737X8]

Inner banks are mentioned in 1766 lease book required ‘banks and fences which may be made in and about said Warren to be kept in good repair and keep as far as possible all the rabbits within the warren and prevent their burrowing on other lands’ 1842 Estate map indicates an internal bank separating ‘sweepages’ from ‘burrowings’ [MC 1784/1 828X9, NROCAT MC 2506/2]