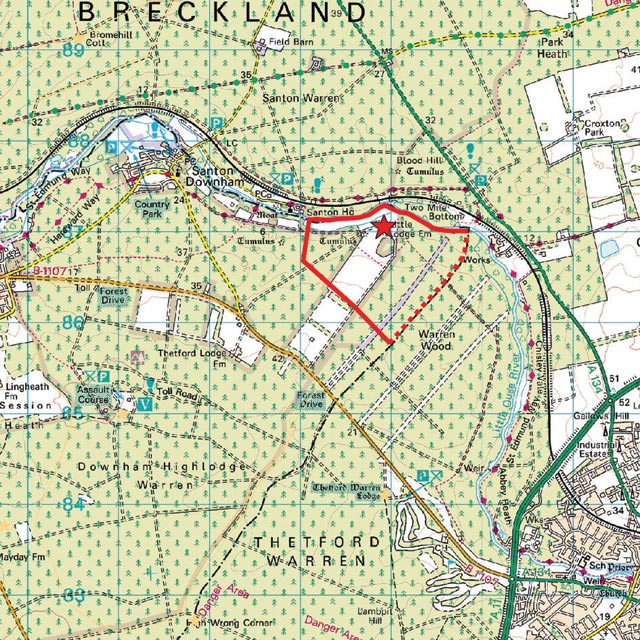 Trapping Banks
Dome-shaped bank 4m wide x 1m high but very ‘lumpy’. Runs towards north-south track and then meets another bank at a corner (ie they join) at TL82984 87015.

Other documentary evidence
The manor of Santon Downham was held by St Edmundsbury Abbey before the Conquest, and by Frodo, Abbot Baldwin’s brother, in 1086. A John de Santon appears c.1170, and his granddaughter Alice married Robert de Vere, 5th Earl of Oxford (1240-96), which is the likeliest explanation for the manor passing to the de Vere family. The manor was subsequently subdivided, but a relevant feature of its history is the granting of Downham Ixworth manor to Ixworth priory in 1250-51. After the Dissolution it was granted to Richard Codington. The estate passed through many hands until it was sold to speculators in 1918. It was acquired by the Forestry Commission in 1924.

Section 2 At TL82848 86632 the linear bank (as in Section 1b above) 6m wide x 1m high turns to the north in a distinct curve. It continues to the right of the track but is much lower at 4m wide x 0.3m high. Bracken and trees on top both deciduous and pine. Bank 5m wide x 0.7m high truncated when reaches field (which may have been turf-stripped).

Section 4 Another bank with old oaks on it runs parallel to bank nearest track (as in Section 3). This second and eastern bank 8m wide x 1m high covered with bracken. AT TL82890 86871 this bank flattens out in the plantation. There is another very faint bank 0.3m wide x 0.1m high and 10m to the west but for a short distance and in older trees.

Secton 5 From the loading bay, a bank 0.8m wide x0.8m high meets the bank from Section 1a
and runs parallel to it c 40 m away from it.