The Breckland Society’s current project is “The Cold War in The Brecks”. It is supported by almost £10,000 of funding from the National Lottery Heritage Fund, and participation is open to everyone, whether they are Society members of not. View the press release

If you would like to get involved with the project,  please email our Project manager, Peter Goulding, at brecksmilitaryhistory@gmail.com . You can also download the sign-up form here. There is also a Facebook Group which you can ask to join.

Chris Cock bought a photo albumn on Ebay. We think it belonged to an RAF Police serviceman who was based at Feltwell at some stage. It contains some great photos of Thor missiles being transported (probably to or from Feltwell). 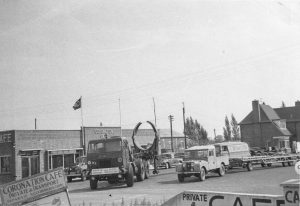 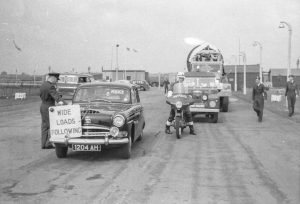 Convoy setting out – but from where? 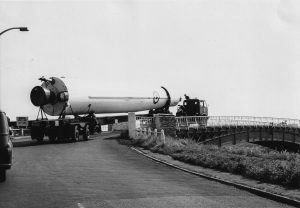 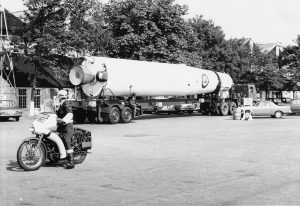 Thor missile safe inside a base – but which one?

The album also contained some other great photos of one of the many CND/DAC protests, taken from inside the base perimiter fence, presumably by the policeman. 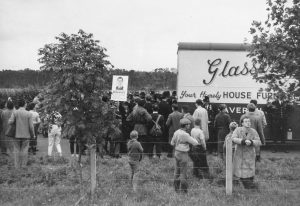 We know that the police used removal lorries to transport protesters to court during the Swaffham protests in 1958, but we think this is a later protest, from the ealy 1960s perhaps. The face on the polacard is Brian McGee, a serviceman  who was sentenced to two years in prison for dispobeying an order and later became prominent in the Londodn Committe Of 100.

Does anyone recognise the background? What might the base be? 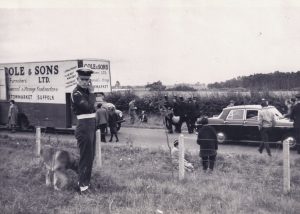 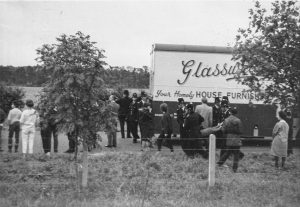 Sixteen people attended, both BreckSoc members and others.

Swaffham Library has a rich collection of local Cold War material, especially related to the building of the Thor missile site at RAF North Pickenham, the DAC/CND protests and the reaction of local people (who seemed to be almost unanimously pro-Thor).

We were shown documents related to the rather bizarre event where the Town Clerk received a phone call from a Soviet ‘journalist’ after the CND protests. We saw the Town Clerk’s rather stiff, precise written report to the authorities (“my secretary received a telehone call at 4.02 pm ….”),  a photocopy of the subsequent article in Russian, and a translation of it into English, sent in by a local Russian speaker. While both reports of the conversation were very consistent, the article’s interpretation of events in Swaffham and elsewhere would have lead most readers to assume that England was about to rise up and throw off the shackles of the evil USA oppressor.

Chris Cock also brought along a rich collection of material related to Thor and the Royal Observer Corps. We were astonished to find that the Thor base at Feltwell produced a regular ‘newspaper’. A Christmas edition showed a jolly Santa Claus happily riding off to destroy the Soviet Union on the nosecone of a Thor missile – rather reminiscent of the closing scenes of Dr Strangelove!

Sometimes, black humour is the only way to deal with the unthinkable. 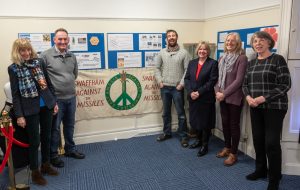 Some of the attendees in front of a local protest banner from the early 1980s.