This page is still under construction. More material will be added over the coming months.

The IWM collection contains lots of images of Thor in the UK; many of them relate to Feltwell as it was the first operational Thor site.

Each Thor base contained three identical launchpads. The configuration below at RAF Feltwell is typical. (Diagram copyright John Boyes.) Feltwell was the first of the twenty UK Thor sites to become operational, on 19th January 1959. 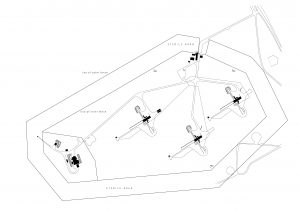 It may seem odd that if the missiles were fired vertically all of the launchpads were oriented in the same direction. However, the missiles relied on inertial navigation, and this system had to be calibrated frequently and extremely accurately. This was done when the missiles were stored horizontally, pointing in the direction of their target. (Diagram original source and copyright unknown.) 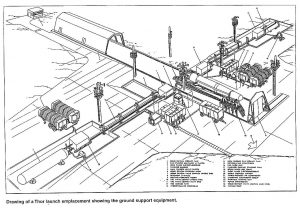 The following picture was taken from an RAF helicopter during the final stages of the RAF Feltwell Thor site construction.  The partial shadow of the helicopter (presumably a Westland Wessex) can be seen at the bottom. The main Feltwell hangar group can be seen in the middle distance, and the steam plume from the Wissington sugar factory can be seen on the horizon, to the right. The sliding hangar for the foreground launchpad is partially completed, and pre-fabricated roof panels can be seen stacked on the concrete. 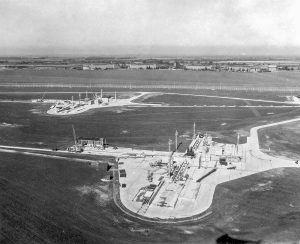 One of the project’s more notable finds was an old photo album purchased from eBay by Chris Cock. We don’t know who originally compiled it or took the photos, but he was a member of the RAF police, and it recorded his postings around the world. At some stage in the late 1950s or early 1960s he was posted to RAF Feltwell, where one of his main duties appears to have been accompanying and guarding Thor missiles as they were transported from base to base. Where an individual picture was annotated in the album, this is shown in quotes below. 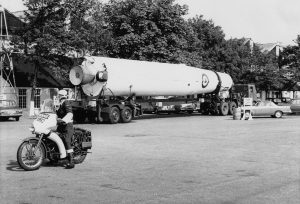 The first two pictures show a Thor missile on its road transporter parked outside hangars at RAF Mildenhall. The missiles were flown into RAF Mildenhall before being transported to the bases in the Feltwell Group – Feltwell, Tuddenham, Mepal, Shepherd’s Grove and North Pickenham (and possibly others). 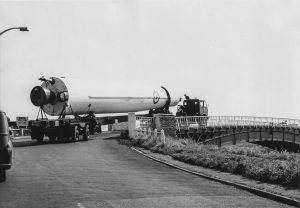 This missile convoy is crossing an unidentified bridge, probably somewhere in the Fens. You can clearly see one of the two drivers (in his open-to-the-elements cab) who steered the rear wheels of the transporter. 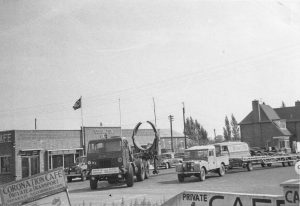 RAF North Luffenham is near Oakham, Rutland, so the mystery policeman clearly serviced convoys to locations outside the Feltwell Group. We have identified the location as the old Coronation Café (since demolished) on the A47 at Thorney Road, Guyhirn. 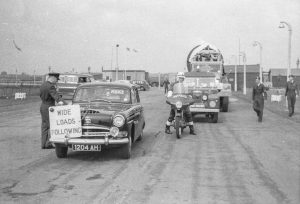 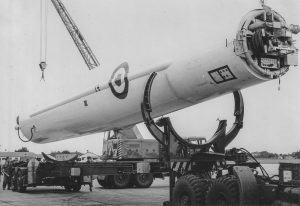 Thor missile being loaded onto or offloaded from a road transporter. Note that the nosecone is missing.

Chris Cock also had a number of copies of ‘Rocket Review’, the internal bi-monthly newsletter published by and for the Feltwell Group of Thor sites. View them here.

The former RAF Shepherd’s Grove in Suffolk is the closest location to the Brecks where some recognisable Thor infrastructure can still be seen. 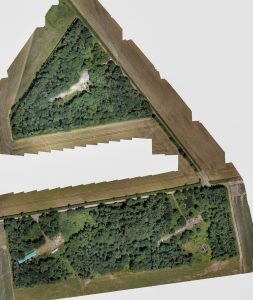 The site is now largely overgrown but the distinctive shapes of the three launch complexes are still visible. Click here for a drone video of the site. Image and video copyright Alan Clarke.